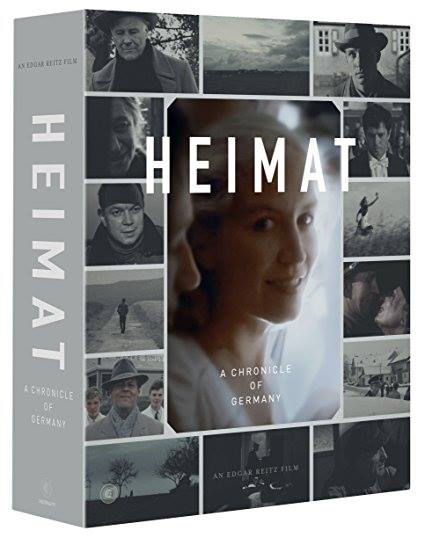 From master of cinema Edgar Reitz and five years in the making, Heimat is one of the most compelling and highly praised dramas in television history. Now this captivating series arrives in a newly restored version and for the first time on Blu-ray as Heimat Limited Edition Box Set courtesy of Second Sight.
Restored from the original negative by The Edgar Reitz Film Foundation, Heimat can now be seen in all its glory in high definition. The stunning collector’s set comes complete with a limited-edition luxury 50-page soft cover book and features a vast array of brand new bonus features including Edgar Reitz’s two-hour documentary ‘prologue’ to Heimat and many fascinating interviews including Edgar Reitz and Marita Breuer. Its set for release on 9 April 2018.
Featuring a stellar cast including Marita Breuer, Kurt Wagner, and Rüdiger Weigang, this epic tale of a family and their rural life in a small German village is told against the changing backdrop of a country’s turbulent history from 1919 to 1982. From the aftermath of the First World War, economic hardship, the rise and fall of Nazism, the Second World War and the decades that followed, life in the village goes on and the values and aspirations of the people at its heart are wonderfully brought to life in this gripping saga of an ordinary family living through
extraordinary times.
One of the most renowned World Cinema titles Heimat scores an incredible 97% on Rotten Tomatoes and continues to captivate audiences across the world.
SPECIAL EDITION FEATURES
• Restored from the original negative by The Edgar Reitz Film Foundation
• ‘Heimat – The Hunsruek Villages: Stories From The Film Locations’
Edgar Reitz’s 2-hour documentary ‘prologue’ to Heimat
• An interview with Edgar Reitz on the making of Heimat
• An interview with Christian Reitz on the restoration of Heimat
• An interview with Marita Breuer on acting in Heimat
• An introduction by Jan Harlan on the significance of Heimat for Stanley Kubrick
• A Visual Essay by Daniel Bird
• 50-page limited edition soft cover book featuring liner notes by Carmen Gray, ‘The Collaboration with Gernot Roll’ by Edgar Reitz and ‘Germany as Memory’ by Anton Kaes
Title: Heimat: Limited Edition Box Set Release Date: 9 April 2018
Cat.No.: 2NDBR4079 RRP: £79.99
Cert: 15 Running Time: 889 mins approx.